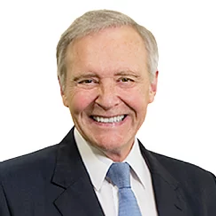 Ambassador LeBaron serves as a Principal and senior consultant at Omnipoynt Solutions active in the practice area of international business, with an emphasis on the Middle East, especially the Arabian Gulf.

Dr. LeBaron was the senior advisor of international business at Squire Patton Boggs LLP where he advised both U.S. and non-U.S. clients, helping clients abroad identify business and investment opportunities within the United States and assisting U.S. clients with market entry and strategic planning for MENA business activities. He is also the vice-chairman of Daruna Real Estate Brokerage & Development, a Qatar-based company focused on building migrant worker housing that meets all international standard. In October 2015, Daruna signed a $219.4 million deal to build a residential complex for 12,000 workers housed on a 150,000 square meter plot.

He served as U.S. ambassador to the State of Qatar (2008-11) and to the Islamic Republic of Mauritania (2003-06). Between his ambassadorial appointments, he was the political advisor to the commander of U.S. Special Operations Command at MacDill Air Force Base in Florida. His earlier assignments in the diplomatic corps included deputy chief of mission in Manama, Bahrain and consul general in Dubai, U.A.E.

Joseph joined the U.S. Foreign Service in 1980, serving first as vice-consul at the U.S. Embassy in Qatar. His later diplomatic postings included Amman, Ankara, Istanbul and Washington. In 1989, he was seconded to the U.S. Senate to serve on the national security and foreign affairs staff of Majority Leader George J. Mitchell. From 1998-2003, Joseph served in the Bureau of Intelligence and Research at the Department of State in several positions, including senior deputy assistant secretary. He has earned several awards including Presidential Rank Award (Meritorious) The White House; Outstanding Civilian Service Medal, U.S. Special Operations Command; and Superior, Senior Performance, and Meritorious Honor Awards, U.S. Department of State.

Before joining the Foreign Service, he received his MA and Ph.D. in Near Eastern Studies from Princeton University. Ambassador LeBaron studied Arabic and Middle Eastern Affairs at the American University of Beirut and was a doctoral research fellow at the University of Khartoum. He is an alumnus of MIT’s Seminar XXI on International Relations and a graduate of the Senior Executive Program on Intelligence Policy at Harvard University’s Kennedy School of Government. Formerly a part-time member of the graduate faculty of the Elliott School for International Affairs at George Washington University in Washington DC, he speaks Arabic and Turkish. Joseph is a Vietnam veteran and served in the U.S. Air Force from 1970-74.