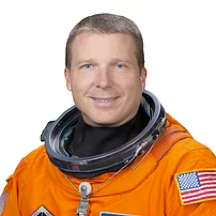 Colonel (retired) Virts served in the US Air Force as a fighter pilot, test pilot, NASA astronaut, and is a graduate of the US Air Force Academy, Embry-Riddle Aeronautical University, and Harvard Business School.

On February 8, 2010, Terry made his first spaceflight as the pilot of the Space Shuttle Endeavor during mission STS-130. His next launch was onboard the Russian TMA-15M in November 2014 from Kazakhstan. In March of the following year, he assumed command of the International Space Station as Commander of Expedition 43, where Terry spent over seven months in space.

Terry travels the world inspiring audiences with stories from space as well as his insights into life on earth. He brings his unique perspective to businesses around the world in such diverse topics as our environment, global wealth, intercultural leadership, crisis and risk management, innovation, strategy and vision, and decision making. He recently directed his first film, One More Orbit, and is currently involved in several television and film projects, serving on corporate boards, writing, and promoting public policy.

Terry is also one of the stars of the IMAX film, A Beautiful Planet, shooting much of the stunning footage himself. Terry’s photography is also featured in his National Geographic book, View from Above, which is a curated collection of some of the 320,000 photos Terry took from space. This latest book is a deluxe and limited-edition artful commission of the Apollo 11 moon landing flight plan, celebrating the 50th Anniversary of Apollo 11. His next book, The Art of Space Travel, is due out in the fall of 2020.

He is one of only four astronauts in the world to have piloted a Space Shuttle, flown a Russian Soyuz spacecraft, performed spacewalks, and commanded the ISS. Terry has a unique perspective of the earth having taken more photos from space than any other astronaut.