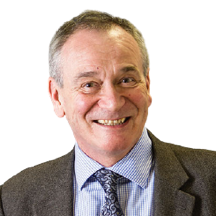 Major General John Holmes serves as an advisor to Omnipoynt's management. He is a decorated UK military officer, serving 32 years in the British Army, and is a founding Director and Chairman of Quintel Intelligence. General Holmes is the former Director of the UK Special Forces, commander of the 4th Infantry Division, and worked as the Special Operations Liaison Officer at the British Embassy in Washington DC.

John joined 22 SAS Regiment from the Scots Guards in 1974. He subsequently enjoyed a full UK Special Forces career including; serving as the Special Operations Liaison Officer at the British Embassy in Washington DC, running the Special Forces Policy Desk in the UK Ministry of Defence, commanding 22 SAS from 1989 to 92 (a period which included Gulf War 1), commanding the UK Airborne Brigade from 1993 to 1996 and subsequently serving as Director of UK Special Forces, during which time he commanded Operation Barras, a challenging hostage rescue operation in the Sierre Leone jungle, in 2000.

He opted for early retirement in 2002 and completed Project Unicorn, a counter-terrorist study for the Metropolitan Police and in 2003 he joined the Board of Erinys International. Subsequent to Gulf War II, he was instrumental in creating a 15,000 man Oil Protection Force with its own air wing for the Coalition Provisional Authority.

General Holmes has been awarded the Distinguished Service Order, Officer of the Order of the British Empire, and Military Cross. He is a graduate of the Royal Military Academy Sandhurst. Omnipoynt offers its clients discrete intelligence and due diligence services through its affiliation with Quintel Intelligence.