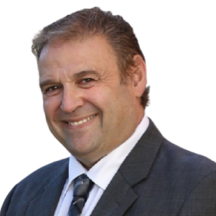 Geoff Abadee is the VP of Operations and Logistics for Omnipoynt Solutions. With almost 40 years experience as a leader in international logistics for multiple industries, Geoﬀ has worked for commercial airlines, run a charter cargo airline, and owned his own successful freight forwarding company.

In 1981, he started straight out of high school in his native Sydney, Australia, working for an American freight company while attending college at night. He worked as a licensed customs broker with military bases, on behalf of Hughes Aircraft and Raytheon, when setting up the Australian satellite and FA18 Fighter Jet communication systems.

Later Geoﬀ transitioned to the live entertainment industry, handling logistics for major concert tours across Australia and the South Pacific. This led to helping grow the Australian film industry by developing relationships between film commissions and U.S. studios.

Geoﬀ returned to his airline roots, as he was enticed to run a charter airline company in the U.S., which led to his founding Behind the Scenes Worldwide Logistics (BTS) and setting down roots as a U.S./Australian dual citizen while growing his family in Los Angeles. Over 100 films later, BTS gave him the opportunity to work in over 70 countries, on behalf of film, television, music, sporting, live event, ad and auto production companies. After selling BTS to his employees 15 years later, Geoﬀ expanded into real estate, financing, and logistics for multiple industries, including personal collections and government contracts.

With a network of international freight agents, contracts with airlines, trucking, and packing/ crating companies, and a drive to successfully take on any “mission impossible,” he is known for pulling oﬀ air, sea, land, and rail logistical miracles for almost any industry. From critically tight deadlines, live animals, and hazardous material, to oversized cargo including military tanks, boats, and aircraft, Geoﬀ is a master of problem-solving.