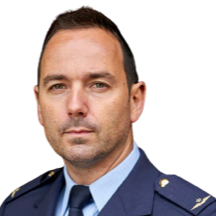 Major (retired) de Ruiter is a senior consultant at Omnipoynt Solutions with a focus on international aerospace and defense projects. He served as an AH64D Attack Helicopter pilot in the Royal Netherlands Air Force.

In 2018, he was Knighted by King Willem Alexander of the Netherlands and became one of only four living recipients of the Military Order of William, the oldest and highest honor of the Kingdom of the Netherlands, for heroic deeds during the period that the Netherlands was responsible for the military deployment in the province of Uruzgan (2006-2010).

Roy applied for the Air Force at the age of 16 and earned his Military Pilot Wings in 2001. With a passion for tactics and strategies, he fulfilled various leadership roles and combat deployments around the world. He is a graduate and later became an instructor of the prestigious Helicopter Weapons Instructor Course (HWIC). Roy ended his Military career as the Head of Tactical Training in Fort Hood, Texas where he organized and directed large scale and highly realistic joint and combined live-fire exercises while also responsible for the annual combat readiness evaluation of all Dutch Apache pilots. Roy still flies commercially as a Search & Rescue pilot.

Sir de Ruiter is a graduate of the Royal Military Academy (Koninklijke Militaire Academie). He also served as an advisor and instructor to the Royal Oman Police. Roy maintains strong and useful networks of entities with foreign governments & militaries and creates successful joint venture partnerships for his clients which expand their global business reach.